Unlike most other solids on Earth, ice floats. As water freezes, it expands to include lots of airy pockets, which means that ice is less dense as a solid than as a liquid. Fresh water ice is relatively dense and impervious while sea ice, ice that freezes directly from mineral-rich ocean water, develops interconnected sand-to-finger-sized channels that help control its decay during warm months. Through the Seasonal Ice Zone Observing Network (SIZONET), one of about 35 National Science Foundation-funded projects in the Arctic Observing Network, Hajo Eicken, research associate Chris Petrich, and graduate student Matthew Druckenmiller (all from University of Alaska, Fairbanks, UAF), study the small-scale properties contributing to the formation and disintegration of arctic coastal sea ice. In addition to gaining a better understanding of the role of sea ice in the global climate system, Eicken’s team hopes to help coastal communities which rely on sea ice–like Barrow, Alaska–by forecasting break-up, the time of year when seasonal ice begins to melt.

Off the village of Barrow, BASC employee Michael Donovan navigates a boat to a grounded ice foe in July 2008 so that Matt Druckenmiller can take an ice core.

“Sea ice provides many animals, humans included, a surface on which to live, travel, and hunt. We want to understand how sea ice decays from a materials perspective,” explains Eicken. “We also want this information to be useful to local communities for whom break-up is important for hunting and whaling. We spend time trying to understand how people in Barrow use the sea ice in their daily life so that we can define and redefine our models and projections for how the ice will behave.”

Eicken’s group studies the seasonal sea-ice zone, which includes land-fast ice (ice that freezes to the coastal shoreline) and drift ice (ice that floats on the water surface). In contrast to multiyear ice, which does not melt in the summer, seasonal ice builds up during winter months and melts in summer months. This means that seasonal ice is far less stable. From a human perspective, then, break-up can be dangerous because how the ice melts varies from year to year and progresses over the season.

Break-up begins with melting on the sea-ice surface. If the meltwater is retained, it pools on the surface. Because of the darker color, the ice surface ponds absorb heat and create a positive feedback for even more melting.

“We study seasonal ice rather than multiyear ice because we understand far less about seasonal ice. The forces which control breakup are highly variable – sunshine and warmer temperatures, tides, and storms all contribute, but to what degree remains less clear. But from a Search and Rescue perspective, it is very important to the Barrow community to have as much information as possible during break-up, especially since the coastal land-fast ice and ice drifts have become much more unstable over the last 20 years,” Eicken says. 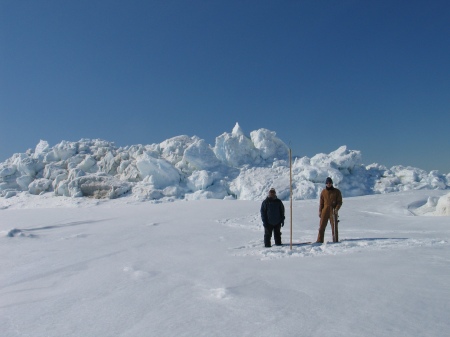 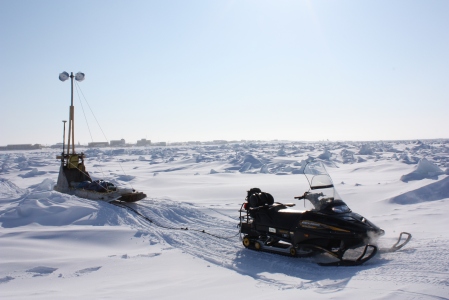 These are especially useful to local communities during spring whaling season, when hunters establish camps on the sea ice. “Matt [Druckenmiller] created maps showing ice thickness along whaling trails on the land-fast ice off Barrow. These maps have proven useful for the community who might have as many as 200 people spread out over a 20-mile area or more during whaling season. This is a big safety issue for them,” says Eicken. “We’re posting satellite and radar images along with sea ice trail maps on the Internet and holding workshops with folks in Barrow both to educate them about how to use these data as well as to help us refine our forecasting models.”

This entry was posted on Tuesday, January 19th, 2010 at 4:04 PM and is filed under Alaska, Cryosphere, National Science Foundation. You can follow any responses to this entry through the RSS 2.0 feed. Responses are currently closed, but you can trackback from your own site.