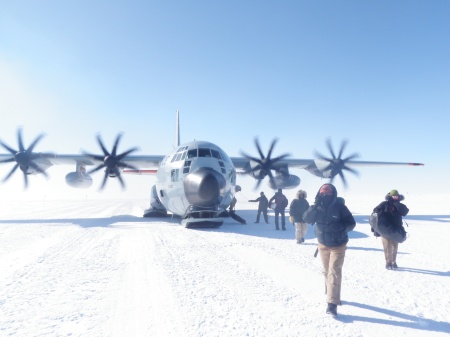 They are our swallows at San Capistrano, the newly arrived CPS summer staff.  Harbingers of the research season to come, they flock to Summit Station just ahead of the first group of scientists, to assist with final preparations. And they arrived last week during a warm spell.

A warm spell that softened Summit’s long skiway enough to bog an LC-130, Skier 92, on 28 April. After repeated unsuccessful passes down the strip, the New York Air National Guard 109th Airlift Wing’s flight crew bunked at the station, along with the phase three winter staff and others who had been trying to depart on the outbound. 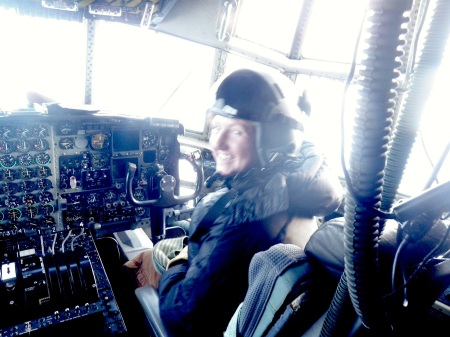 Summit staffer Marie McLane tries out the co-pilot seat in Skier 92. LC-130s rarely linger on snow, so this chance to explore the cockpit at Summit's front door couldn't be ignored. Photo: Sonja Wolter

CPS staff worked the heavy machines up and down the skiway all night to prepare for the next round on Thursday.

The Air National Guard sent the big guns–or propellers–on Thursday: Skier 93, fitted with special 8-bladed propellers.  Skier 92 offloaded all of its passengers and most of its cargo, and after five passes, it finally was able to lift off for Kangerlussuaq.  Skier 93 soon followed, loaded with passengers and cargo from the original plane, after only two passes down the skiway. “The eight bladed prop makes an amazing difference,” wrote station manager Ken Jessen.

Read about the NP2000 8-bladed propellers in this field notes blog post.

With planes off the skiway,  Summit staff continued preparing the station for spring researchers. Noted polar explorer (University of Colorado) Koni Steffen will stop in during his Twin-Otter-supported maintanence visit to the automated weather station at Summit. 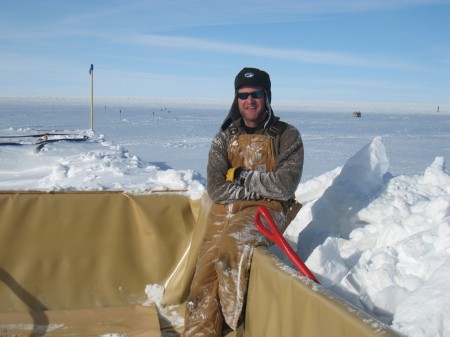 An LC-130 equipped with special 8-blade NP2000 propellers visits Summit Station, Greenland, late in July. Test flights suggest the propellers will allow these cargo planes to take off on skis with much heavier cargo loads than do the standard 4-blade propellers. Photo: Mark Doll, USAF

We heard from Mark Doll today after he’d had a chance to catch up from “a great week in Greenland.”  That week, a flight period for the New York Air National Guard 109th Airlift Wing, included test flights of an eight-blade propeller system mounted on the LC-130 cargo planes, which provide the heavy airlift to the National Science Foundation’s polar research program.

How did it go?

“During the week of 27-31 July, the 109th continued test flights with the 8-blade NP2000 propeller. The program consisted of two trips to Summit and one to Raven Camp. At each place, we conducted a series of take-offs at various weights both on the skiways and in the open snow. While we are still reducing the data, we can say that we set an unofficial take-off record at Summit: 143,000 lbs, -11 deg C – with an 18kt tailwind! Granted the snow was quite good, and the skiway in great shape, but no one expected a successful take-off under those conditions. The whole crew was surprised. We even took off from Summit open snow at 113,000 lbs; under normal conditions, that would have been impossible even with JATO. 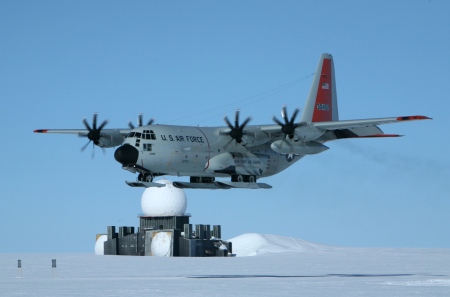 Ed Stockard shot this photo of Skier 92 at Raven Camp. Dye 2, rear, was part of the Distant Early Warning System radar sites established across the Arctic during the cold war, and it is located about 1 mile from Raven.

“The NP2000 propeller offers reduced vibration, noise and maintenance costs, while increasing thrust. The absolute amount of increased thrust is still being determined. However, in our subjective opinion, it offers much better performance for ski take-offs. Our intent is to eventually equip all LC-130s with the NP2000 to increase our cargo-carrying capability while reducing the use of JATO.”

The planes, traditionally outfitted with four-blade propellers, have skis to land on snow and ice. And while these are absolutely essential at the poles where few paved runways exist, the LC-130s pay a high price in terms of efficiency: drag makes the “Ski Birds” ungainly on takeoff (and can lead to ski ways that are several miles long!) and it also reduces air speed. 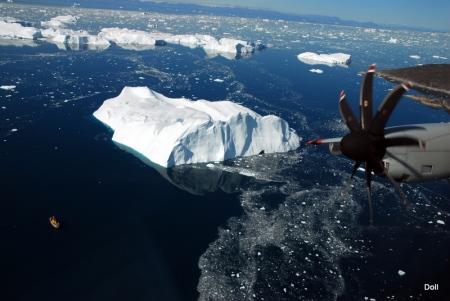 The test flights cap about 10 years of research and development for Doll and colleagues, he says.  Back in 1999, “I started asking questions about the thrust of the existing propeller so I could start to define the ski drag,” Doll recalls. ”I quickly was referred to Hamilton Standard (Hamilton Sundstrand) for some answers. That started the relationship that led to the NP2000 discussions. At the time, the propeller was being designed for the Navy’s E-2 Hawkeye; the C-130 was only a dream.

“It has been a long road to get this far; and we’re still a long way from success. Even after we prove the viability and capability of the NP2000, we still have to procure the funds for installation. Last week in Greenland was a success and brought us one step closer to an answer, no matter what the answer is.”